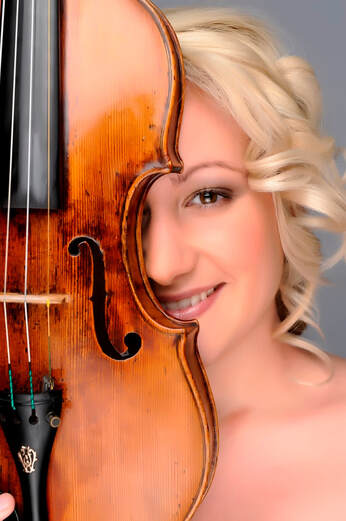 Nicole Crespo O´Donoghue is a young and vibrant, international virtuoso violinist. She is a Graduate Teaching Assistant at the Royal College of Music , where she is completing her PhD as an RCM Studenship holder. She is also a recording artist, creator and author, with publications and short documentaries on The Strad Magazine, Puentes and La Revista.

Nicole is Head of Strings at Westminster City School and Visiting Professor at Virgo Fidelis. Her aspirations are to inspire the education of tomorrow´s young musicians and performers. She states, "It is a privilege to not only teach young people to create music, but to help them become the best they can be. Music is essential for the successful sharing of knowledge. Music is no longer an option but a dare necessity."

2019 saw the release of her first full solo album "Serenity" https://www.nicolecrespo.com/musicians-259268.html  and it is available on all major streaming providers: Amazon, Spotify, Apple, iTunes, Deezer, Napster, You tube, and IMDb

Nicole's career has brought her into the most distinguished recording studios including Abbey Road Studios and Air Studios, where she has been involved in various film, tv and theatre soundtracks.
Credits include: Spencer, Alien, Matrix Resurrections, The Mummy, Cyrano,Yellowstone, The Two Popes,  Alien Covenant, Assassin’s Creed, Power Rangers, The Smurfs, Ugly Dolls, Chevalier, Stranger Things.
​
She has Performed live for BBC Radio3 (InTune), National Irish Radio and ClassicFm, and participated in the first ever radio broadcast for pets, in collaboration with the Battersea Dogs Home.
Performances have taken her worldwide with tours that include the U.S., Abu Dhabi, Germany, Italy, Poland, Belgium, Spain and Ireland. She has also performed in all major venues in the UK, with regular performances at The Royal Albert Hall, Royal Opera House, Royal Festival Hall, Cadogan Hall and The Barbican.​
Long version
At six years of age Nicole entered the  Conservatorio de Musica de Leioa, where she studied violin with Professor Antonio Mendia. In 2009 she went on to be the 1st prize winner in the Euskadi Young Musicians competition. Nicole obtained First class honours in Sciences in the International Baccalaureate DP. At 16, Nicole was invited to the Royal Academy of Music,University of London. She was awarded a scholarship by the Cultural Department of the Diputacion Foral de Bizkaia  for her BMus Performance studies at Royal Academy of Music, where she also obtained First class honours in violin, piano, orchestral conducting and business studies. Nicole plays on a violin “Pietro Antonio Dalla Costa” (Treviso, 1762) graciously on loan from the museum of the Royal Academy of Music.
Her Masters Degree was sponsored by the BBVA and a British-Spanish Society grant which enabled her to study a Masters in Performance at the Royal Academy of Music, University of London, under the tutelage of Profesor Mateja Marinkovic. Her studies were also kindly supported by The Helen Worswick Scholarship ,The Stephen Bell Trust  and the St.Marylebone Educational Foundation.

Nicole is a Graduate Teaching Assistant at the Royal College of Music where she is completing her PhD as an RCM Studenship holder.

​Links
​Awards Performances
Nicole performed at  Wikipedia's official 10th anniversary, held at the Louise T Blouin Foundation in West London. People in attendance included Jimmy Wales, Richard Dawkins, Peter Gabriel, and Cory Doctorow. Nicole has played at the Opera Theatre Arriaga (Bilbao) before King Philip and Queen Leticia of Spain and for the President of the Basque Country on various occasions. Nicole played in Brompton‘s Oratory (London) before the Ambassador of Spain (through her cooperation with the British-Spanish society).Violinist for the Duke of Edinburgh awards (DOFE) and for HRH Princess Anne where she was presented with an award for her musical contributions. She was on tour as soloist with the BOS (Bilbao Symphony Orchestra) and has played with other orchestras such as the EYPO and London Concertante. Recently, she made her onstage London West End debut with Michael Flatley Lord of the Dance, Dangerous Games at the Dominion and Playhouse Theatres (London). Nicole performed at the Hightide Festival in Aldeburgh with actor Henry Goodman and Jill Lady Freud and has participated live on BBC Radio3 programme InTune.